Around the same size as Switzerland, Bhutan has a population of about 800,000. Climatically the country falls into three main zones: the subtropical south, with its plains and river valleys; a temperate zone with fertile, cultivated valleys in the central inner Himalaya, rising to 3000 metres and containing the main towns of interest; and the cold higher Himalayan region, with the three highest peaks towering around 7000 metres.

Bhutan’s uniqueness stems from its virtual isolation from the rest of the world until relatively recent times. Its people, culture, and religious festivals are testimony to a rich way of life which has changed little for over 1000 years. Monuments to its rich history and Buddhist tradition are visible throughout the landscape.

For those interested in the philosophy of modern Bhutan you may be interested to read an article from the International Herald Tribune of 7 May 2009 on how the pursuit of happiness is incorporated into the country’s economic policy.

Thanks to the intact state of its forests an incredible variety of flora and fauna makes Bhutan a paradise for trekkers and nature lovers.

There are three distinct regions from west to east to consider in planning your trip. Each offers its own special treats. The west is famous for its beautiful mountains and fertile valleys, colourful houses, historic sites and museums in the towns of Thimphu, Paro and Punakha. A number of day hikes are possible in this area as well as a number of treks of varying lengths. Central Bhutan is known as the Asian Switzerland for its beautiful landscapes and is also the spiritual heartland of Bhutan with its many temples and monasteries. This area also offers several opportunities for day walks in the stunning Bumthang valleys and the chance to visit many important religious sites including the important historic town of Trongsa, ancestral seat of Bhutan’s ruling dynasty.

Although it is the most densely populated area of Bhutan, the eastern region is also the least visited by foreigners. Tourist facilities are far more primitive than in western and central Bhutan and you need to be prepared for a lack of hot water and western toilets. However if you have the time to travel east it is well worth the effort, with its remote valleys, temperate climate, monasteries and tradition of stunning craftsmanship in woodwork and exquisite hand-woven textiles. Don’t forget though, that to access the east you need to be prepared for some lengthy drives on rather rugged mountain roads.

For an account of a trek in the far east of the country, by kind permission of the author, read Solange Hando’s article “Rigsum Gompa“, which first appeared in the Druk Air magazine “Tashi Delek” – text and photos copyright Solange Hando, all rights reserved 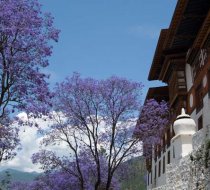 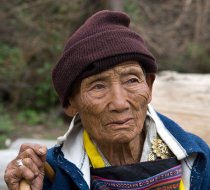 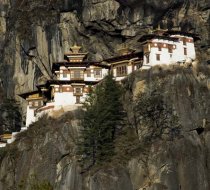